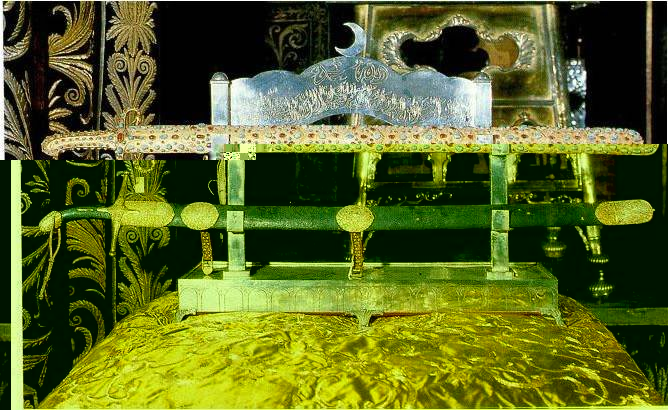 The essence of Islam is accord, that is, peace. War is an exceptional scenario.
The term Islam means peace and salvation. However, it is meaningless for a country to wish for peace unilaterally. One must be prepared if one’s enemy is preparing to attack and looking for the right opportunity.

“O! People do not wish to encounter the enemy; from Allah wish for good health and when you encounter them, be patient. Know that heaven is under the shadow of the swords.”
With this hadith, the Holy Prophet (SAW) discouraged the believers from seeking war while at the same time stating that they should have faith in success if war is inevitable.
In Islam war is not waged to shed blood, gain land or for booty. All of these goals are forbidden. War is just one part of the great and sacred movement, jihad, a word meaning struggle, which encompasses every struggle from the personal to the national.
That is jihad is the struggle to make the laws of Allah (SWT) prevalent in accordance with His will. It is a movement that will continue until that Day of Judgment; it is incessant .
Yet, sometimes in the sources the term jihad is used to denote war, implying that jihad can include war; but we must remember that the words battle and war do not contain the complete meaning of jihad. The struggle held against the enemies of Islam who prevent jihad is war.
In the orders given to the battle commanders Holy Prophet Mohammad (SAW) commanded:

It is understood from this hadith that the true purpose of Muslims is not to destroy people, but to teach them about and help them towards accepting Islam. The true goal of Islam is to make people prosperous in this world and the next.
The religion of Islam bears no resemblance to any other religion or system; the leadership of Holy Prophet Mohammad (SAW) , cannot be compared to that of any other commanders in the history of the world. There is one reason for this;
He was the Holy Prophet of Mercy. He proved that he was the Prophet of Mercy even when leading battles, as HE aimed not for the death and destruction of the enemy but for the prosperity of the Muslims and all the generations to come until the Day of Judgment;
it was for this purpose alone that HE exhibited a superior skill in war.
Since the actual goal of Holy Prophet Mohammad (SAW) in battles was not to destroy the enemy troops, HE never attempted to do so. He always attached great importance to peace.
The Treaty of Hudaybiyah was a great victory accomplished during His life time. The Holy Prophet Mohammad SAW conquered Makkah without shedding even one drop of blood. If he had wished to do so, he could have put the people of Makkah to the sword;
however, he chose not to, as he was the Holy prophet of Mercy. In order to prevent the people of Makkah from making the mistake of attacking the Islamic army and shedding blood, He ensured that they had accepted defeat in advance and sent the following information to them:
1) He who takes shelter in the Ka’ba is secure,
2) Whoever takes shelter in Abu Sufiyan’s house is secure,
3) Whoever locks the door of his house and stays in his own house will not be touched, he will be secured.”
With this superior tactic the Holy Prophet Mohammad SAW dispersed the forces of Makkah and prevented bloodshed. Then He forgave the people of Makkah, and they were brought to Islam by this example of extraordinary forgiveness and mercy.
The principle of “protecting civilians and the environment during wars”, which has become a major problem in our modern world, was achieved under the leadership of Holy Prophet Mohammad (SAW).
He held the Battles of Badr and Uhud outside the city and during the Battle of the Trench he surrounded the city with trenches and protected innocent civilians.
As we have mentioned above, Holy Prophet Mohammad(SAW) applied a different tactic during the conquest of Makkah; he took into the consideration the safety of the civilians on the enemy side and he was able to ensure the same.
Read more about the Character of Holy Prophet SAW
What is Islam? The last sermon of Prophet Muhammad saw
Written by:
Syed Ihtisham Ulhaq Bin Syed Maulana Muhammad Khwaja Din

5 thoughts on “THE HOLY PROPHET MOHAMMAD (SAW) AS MILITARY STRATEGIST”